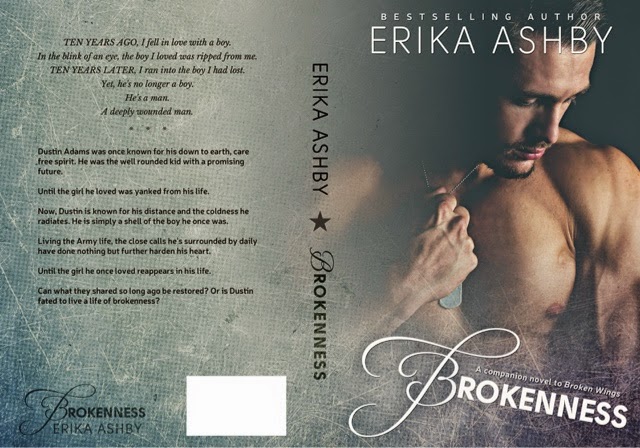 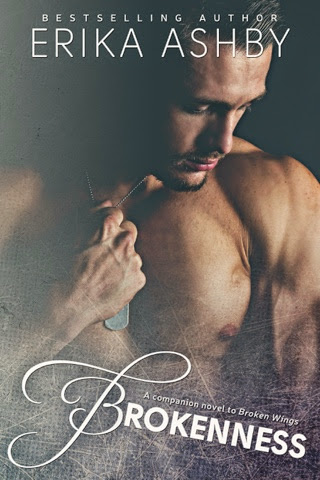 **Brokenness is a companion novel to Broken Wings**

TEN YEARS AGO, I fell in love with a boy.

In the blink of an eye, the boy I loved was ripped from me.

TEN YEARS LATER, I ran into the boy I had lost.

Dustin Adams was once known for his down to earth, care free spirit. He was the well rounded kid with a promising future.

Until the girl he loved was yanked from his life.

Now, Dustin is known for his distance and the coldness he radiates. He is simply a shell of the boy he once was.

Living the Army life, the close calls he's surrounded by daily have done nothing but further harden his heart.

Until the girl he once loved reappears in his life.

Can what they shared so long ago be restored? Or is Dustin fated to live a life of brokenness? 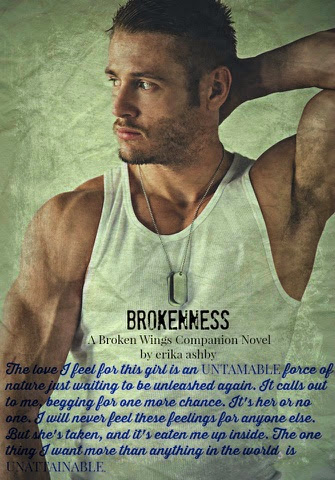 TEN YEARS AGO I fell in love with a boy. All it took was one sideways grin with his perfectly dimpled cheek for me to know I was a goner. My days and nights were consumed by him—if not physically, he was there mentally—always on my mind. I loved him with everything within me. The love we shared was the kind I thought would stand the test of time.

Everyone says your first true love isn't in fact true, but more of a fling. That epic love comes from enduring every facet of life with that person. Rather it be happiness, sadness, loss, gain—you can't truly love someone until it's been tested.

The one day in a blink of an eye, the boy I loved was ripped from me. My overly religious parents didn't like their daughter falling in love so young. It was simply unacceptable to them when I was supposed to focus on God, school, my future and nothing else.

He was my future and when they ripped my future away, I rebelled. I was barely showing by time graduation rolled around. Thank God, because I would have surely been an outcast at my new school. Not to mention what would have happened if my parents would have found out. There was no way I was letting them get their hands on the last thing I had of the boy I loved.

Eighteen, pregnant and sitting at the bus station, I found a friend. One that took me under his wing and I grew to love. It was then I realized the different types of love. He was everything I needed when I had nothing. I love him for the life he has brought me when every option I had was filled with uncertainty. I will forever be in his debt.

Ten years later, I ran into the boy I had loved, yet he's no longer a boy. He's a man. A deeply wounded man. Even though the flesh on his outside is still fully intact, nothing compares to the scars and pain he's carried around on the inside for so long.

Ten years later and I still have the same feelings for him...but they seem so much more intense. Was my first love my one true love? Now that he’s reappeared in my life, my thoughts are consumed by him. But, now they are paralleled with guilt. I love two men, but I love them differently. And, as of right now, I only know one for sure loves me back.

I’m caught between what’s wrong and what’s right…what’s fair and what’s unjust. I know what my heart wants, but is what it wants, what’s right? Feelings can cloud moral judgment. I don’t want what I feel to take over what I know to be right. But, I’m having a hard time sorting out the differences. I’m walking an emotion packed tight rope, and I know I’m going to fall. I’m just unsure who’s going to catch me. 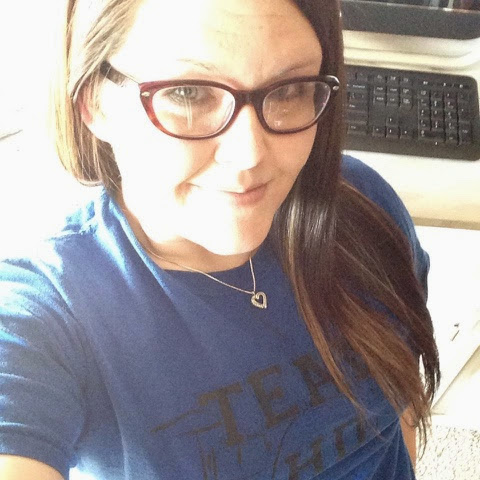 Being born an "Army Brat", Erika Ashby has been residing in Oklahoma the last 10 years finally putting an end to the nomad tendencies she had grown accustomed to. She's a happily married woman who has 5 kids between her and her husband. She has an insane passion for music and a sweet spot for drummers. It wasn't until the age of 29 that she realized she also had a hidden passion for reading; before then she claimed to have hated it. Six months after unlocking that deep desire she never knew she held, she turned the key to another chapter of her life which has become the desire to write. And the rest is still history in the making. 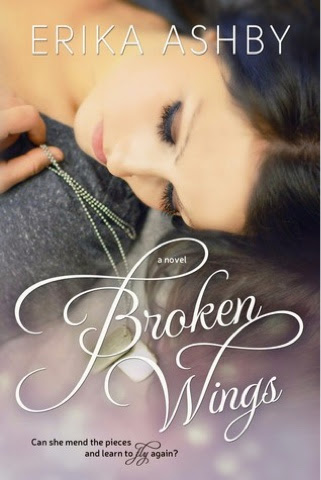