Promo: SEALed With A Kiss 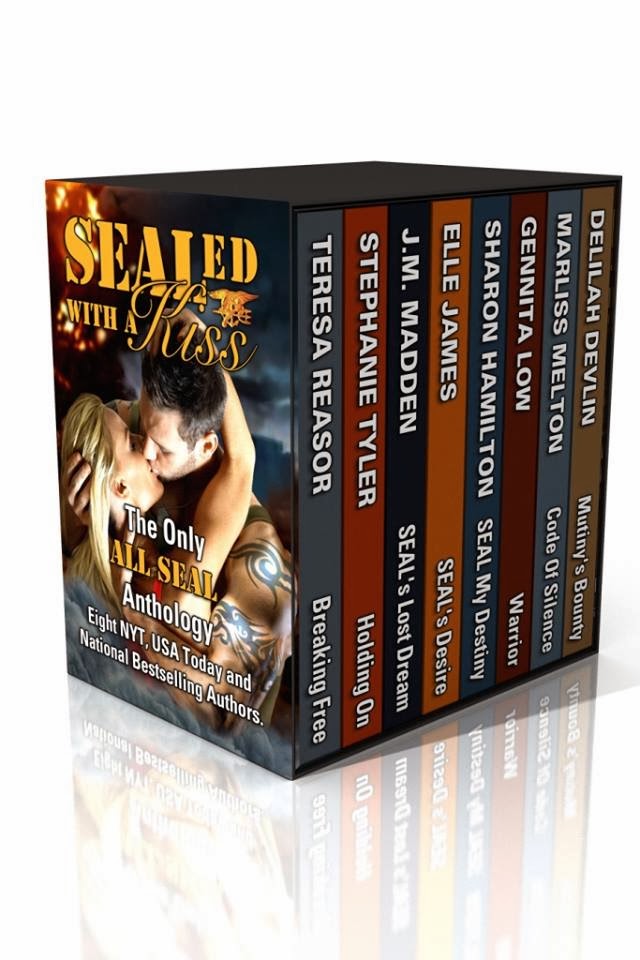 BREAKING FREE by Bestselling author Teresa Reasor
When her brother Brett is attacked and left for dead, Zoe Weaver and Lieutenant Adam 'Hawk' Yazzie work together to discover if one of his SEAL teammates is responsible for his injuries. But will loyalties forged on the battlefield prove more binding than the truth? Or their love?

“My brother doesn’t live my life for me, Hawk. I’ll sleep with whomever I want, when I want.” She pointed a finger at him. “And Brett’s approval or disapproval won’t have a damn thing to do with it when it happens.”
He caught the waving finger, and his lips quirked with amusement. “Understood.” His gray eyes focused on her face and his smile died.
Zoe’s stomach quivered at the sudden intensity of his expression. “I’m not looking for your approval either,” she said. Her voice sounded weak and breathless.
“All right.”
His acquiescence fired her temper and hurt her feelings. She tugged at her finger, breaking his grip. He stepped close and surprised, she tilted her head back to look up at him.
Placing an arm on either side, he hemmed her in against the counter, his body a breath away from hers. Her pulse leaped and she pressed a hand against his chest. The heat of his skin seeped into her palm like liquid fire.
Hawk’s gray eyes narrowed. “I’m stuck between a rock and a hard place here. I promised your mom I’d look out for you.” His throat worked as he swallowed and his voice grew husky. “I don’t think fantasizing about taking her daughter to bed was exactly what she had in mind.”
The knot of tension in the pit of her stomach dissolved as excitement raced through her to settle, tingling and hot, between her legs. Was it possible to have an orgasm just thinking about making love? If he plastered that long, lean, masculine body up against hers, she might just achieve her very first one without his ever having to touch her.
“I’m trying to take things slow here, Zoe.”
She bit back a groan. If he went any slower, she might just dwell on all the reasons she shouldn’t get involved with him, and chicken out all together. Her eyes fastened on the hard, fast beating pulse just beneath the skin of his throat. She rose on tiptoe and pressed an open mouthed kiss there. His skin tasted of chlorine and heat.
He caught his breath, and his hand splayed against the small of her back and pulled her against him. The firm ridge of his arousal pushed against her stomach. When she leaned back to look up at him, he kissed her, the hungry pressure of his lips hot and insistent.
The tempting touch of his tongue against hers intensified the empty ache inside her. Zoe slid one arm around his neck and strained upward to fit herself against his tall frame more fully. She ran the other hand up his back, caressing his smooth, muscled flesh.
He cupped her buttocks guiding her closer, urging her legs apart as he thrust one long thigh between hers. Though she ached with need, she fought the compulsion to rub against the steady pressure of his leg. Hawk had no such reservation. He rocked against her, and Zoe groaned as the movement titillated the over-sensitized area between her thighs driving her closer to the edge.
“Daddy does that to Mommy, sometimes.” The sound of a child’s voice had them both freezing.
Hawk broke the kiss, his breathing ragged, his cheeks flushed. He looked toward the door leading out onto the deck. “I bet.” He shifted putting some space between his lower body and hers.
Zoe stifled a sound somewhere between a laugh and a groan. At least the counter had blocked from view what else had been going on. She turned to look over her shoulder at seven-year-old Tad, the oldest of the Marks children. His red-blond hair, still wet from the pool, stood on end, but there was nothing in his expression that warranted concern.
“Mommy said the burgers were ready when you were.”
Ready? Her face and ears burned with embarrassment.
Hawk’s gaze dropped to hers, amusement in his expression. “Tell your mom, we’ll be right there, Tad.”
The door shut behind the boy.
Feeling exposed and vulnerable, Zoe turned her back to Hawk. “I was supposed to be slicing tomatoes and onions for the burgers.” He pressed against her from behind, and her legs went rubbery. The soft warmth of his lips against the back of her neck sent delightful shivers down her spine.
“I’ll slice the tomatoes, while you do the onions.” He gathered three tomatoes in one hand and moved to the sink.
His touch lingered on her skin and she had to concentrate on slowing her breathing. She wrinkled her nose at him. “Let me guess, aside from the smell, you just don’t want me to see you cry.”
“Sweetheart, I almost did when Tad opened that door.”

Teresa Reasor was born in Southeastern Kentucky, but grew up a Marine Corps brat. The love of reading instilled in her in Kindergarten at Parris Island, South Carolina made books her friends during the many transfers her father's military career entailed.

Though an art teacher and an artist for over twenty years, writing has always  been her first love and passion.

a Rafflecopter giveaway
Posted by Firefly Book Blog at 6:46 AM