Dex is many things, a college senior, the bassist for The Invisibles, a son, a friend, everything but a boyfriend. Everybody knows him as the shallow guy who’s up for a good time anytime. People rarely take the time to see the loyal guy lying just beneath the happy-go-lucky façade.

There are parts of Dex’s life he keeps hidden. Ones he believes no one would understand. Since he gave up on the idea of a dream girl long ago, he thinks he’s finally found the perfect balance of connection without commitment with Sam.

Chrissy used to know everything about Dex. When he left four years ago for college, she was left behind. Four years later, with nowhere else to turn, Chrissy calls the one person she’s always counted on, Dex. One glance at the sad eyes he’s tried to forget and Dex knows it’s out of his control.

With Chrissy's return, lines begin to cross from friendship to something more, but will Dex's secret force them apart forever?

(Can't Let Go is the fourth novel in the Invisibles Series) 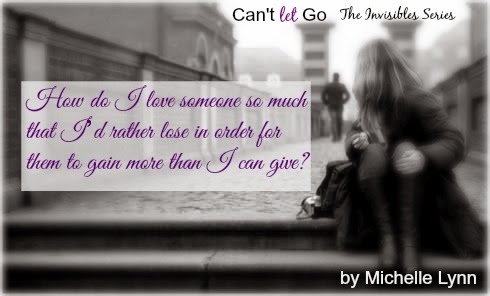 Already regretting my decision to call Dex in the first place, I keep my distance for the remainder of the night, allowing him to have fun with his friends. He doesn’t engage me very much, only telling me even more that he wishes I wouldn’t have invaded his perfect life. By the time we go to bed, we venture into the room that is reserved for the two of us. I guess when you come with so many couples, it negates the whole guys in this room, girls in the other equation.

I escape into the bathroom and change my clothes. By the time I return, Dex is already in his pajama pants, digging in his bag. He drops his phone and bends down to retrieve it. As he steadily stands back up, his eyes roam up my body and a warm current in my blood swirls, following the path of his eyes. He bites his bottom lip and takes a deep breath. “I’ll be back,” he says with a husky voice.

Once he rushes out, I climb under the covers to disengage any sexual urges neither one of us will entertain tonight. In this moment, I wish I could be one of those girls. The ones who could sleep with Dex only to feel the comforting arms of a man, but it’s the fear of after that keeps my hands pinned around my body. The fear that he would sleep with me out of pity, or worse, that he would only do it for his own pleasure and release.

He opens the door, and his blue eyes focus on the television and anywhere but at me. “I’ll sleep on the floor,” he murmurs, never casting a glance my way.

“Don’t be silly. We’ve done this before.” I flip to my side.

“When we were fourteen, Chris.” He grabs the pillow.

“Really, Dex. I trust you,” I tell him, facing him head on, and oh my lord, his muscles are everywhere. He’s always been built, but holy mackerole, he’s insanely big now.

He looks at me long and hard for a few seconds and then pulls back the covers. As he’s sliding under the crisp white linen sheets, the mattress dips next to me. I turn around so my back faces his. We both reach over and turn off the lights on our respective sides. The funny thing is if someone walked in right now, they’d think we were two elderly people, who have been married for years, instead of hot-blooded early twenty-something’s.

Minutes of silence fill the room, and even with me shutting my eyes, visualizing what I imagine the beach must feel like, sleep won’t come. Dex’s close proximity has my body hyperaware of his breathing and his body. “Do you want to tell me?” he whispers.

“I’m okay. Like I said, I just needed a break. Thank you for bringing me. I hope I wasn’t too much of an inconvenience for you,” I lie, and a huge breath releases from him.

“You’re never an inconvenience to me. If you don’t tell me, I can’t help you,” he adds, and I roll over, although, he keeps his back to me.

“Nothing. Like I said I needed a breather.” If I admit to Dex the real reason, he’ll try to fix it and save me like normal. Being here with his friends and the people that care about him, he deserves normality and that’s not in my life’s course.

My hands itch to touch the grooves and contours of the muscles that spread across his back, displaying how hard he works out at the gym every day. “Just wanted to feel normal. So, thank you again.” The lies just continue to flow. He doesn’t need my drama in his life. He has his together, why should my fucked-up past screw with it?

The pillow shifts from the slow shake of his head. “You’re welcome,” he says, and the silence encompasses us once again. Eventually, the light whistling of his breathing signifies he’s fallen asleep. I lie awake, observing the rise and fall of his back until my eyes relent to the exhaustion of the day.

Michelle moved around the Midwest most of her life, transferring from school to school before settling down in the outskirts of Chicago ten years ago, where she now resides with her husband and two kids.  She developed a love of reading at a young age, which helped lay the foundation for her passion to write.   With the encouragement of her family, she finally sat down and wrote one of the many stories that have been floating around in her head. When she isn’t reading or writing, she can be found playing with her kids, talking to her mom on the phone, or hanging out with her family and friends.  But after chasing around twin preschoolers all day, she always cherishes her relaxation time after putting the kids to bed. 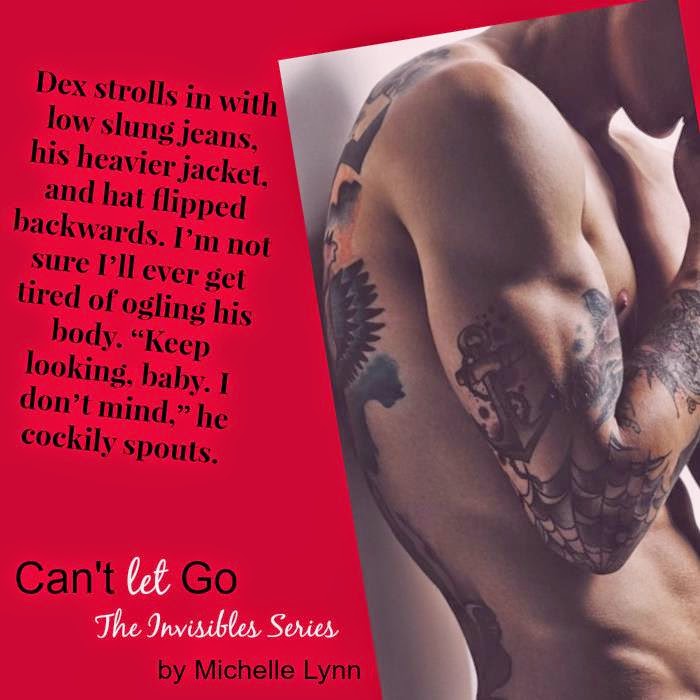 PURCHASE LINKS FOR THE INVISIBLES SERIES:

Review: 5 stars!
Can't let go, is what I was doing while reading the whole book! I was so happy when Dex finally got his head out of his ass and went to Chrissy. I was ready to scream and yell at Dex and Chrissy each time they walked away from each other. But seeing each others back grounds and how it brought them together, was great. You get to watch each character grow. Along with the rest of the crew. I can not wait to read Robs story!!
Posted by Firefly Book Blog at 2:27 PM