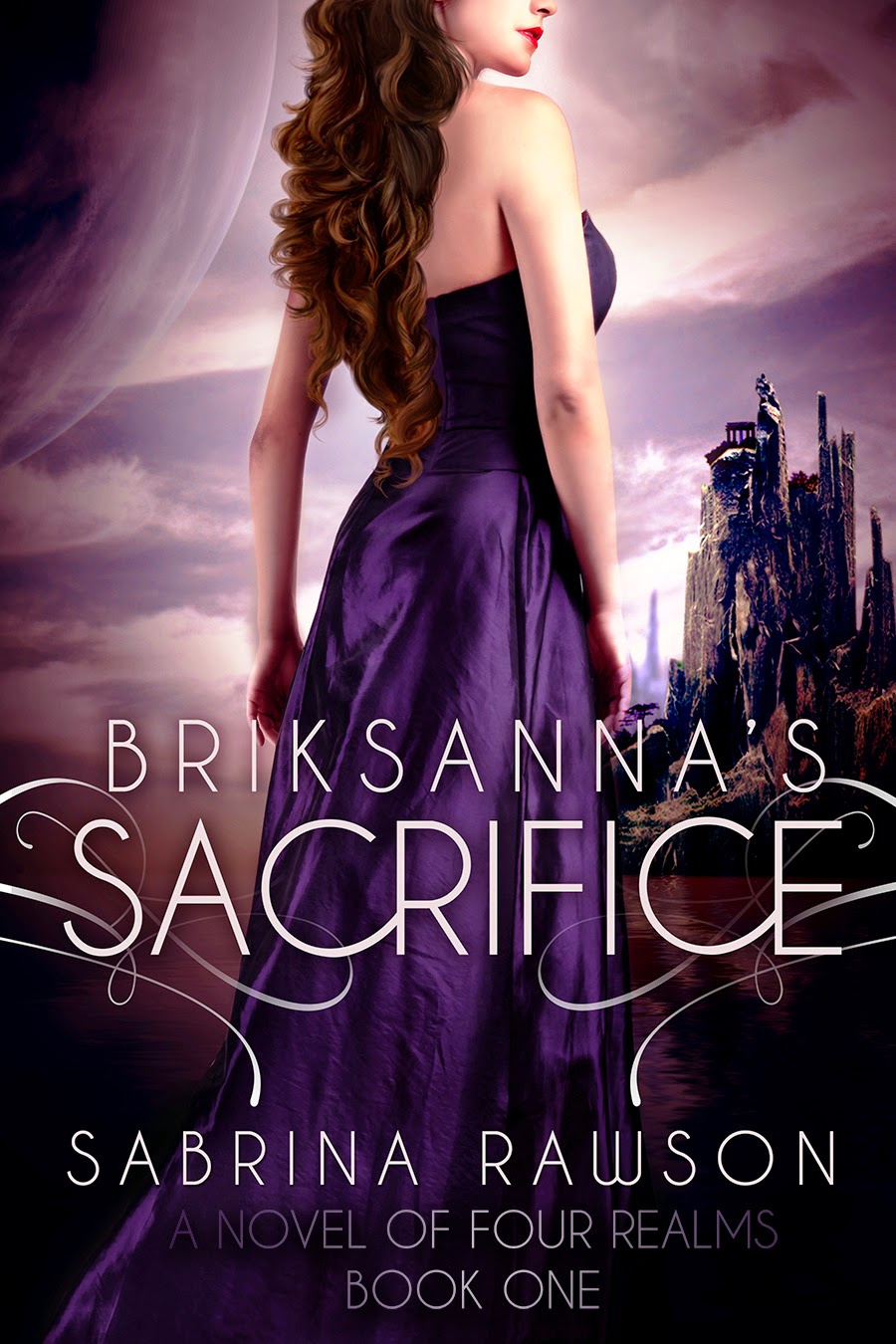 Briksanna’s Sacrifice is a character-driven fantasy romance novel, the first book within a series called A Novel of the Four Realms, about men and women of different realms on a quest to fulfill a prophesy.

Prologue          Captured, physically and emotionally exhausted, Briksanna Akmond, High Princess of Skaldanna has no idea where she is or how long she is going to be kept prisoner.  The Prophesy speaks of her having a starring role in the downfall of Lord Drakkoon.  She escapes her prison draining her persecutor of life.

Two thousand years hiding in the Earth Realm, Briksanna heads a mercenary group called Lightning Strike where every member is part of her adopted family.  Her secret love, Nathanial, openly declares his promise to cherish her forever despite his own reservations.  They are visited by the Goddess Merridian who explains The Prophesy and the importance of their roles.  She reveals Lord Drakkoon is her twin brother and the history of his role in the Under Realm.

In a dream sequence, Briksanna recalls her prison tormentor was actually her betrothed.  Thinking he was dead, she grieved her lost love during her imprisonment.  She does not want to feel the vulnerability of love, and prays for healing from her pain; when her prayers go unanswered she uses her energy to destroy the prison.  Waking, Briksanna is reassured by Nathanial of their growing relationship while giving her space to build their relationship in trust.  Nathanial’s brother, Stark, sits with the rest of the family explaining the importance of solidarity regarding The Prophesy.

In the Under Realm, Lord Drakkoon interrogates his most trusted warrior why he failed his latest mission, in the Earth Realm.  The warrior explains his encounter with Briksanna’s family, and how he lost all of his soldiers.  Lord Drakkoon uses his power to alter the warrior forever changing him.  Merridian is in Lord Drakkoon’s castle when her energy is drained barely escaping the Under Realm with her life.  Briksanna is drained of energy in the Earth Realm.  She contacts her friend, Katerina, who confirms the same had been felt in the Second Realm resulting in the death of her lands.  Briksanna promises to bring help right before fainting in Nathanial’s arms.  In a dream sequence, Briksanna recalls believing she is a victim of tragedy and embraces the desire for vengeance.  Nathanial takes Briksanna to their room to have a surprise visit by Skaldanna’s seer Vakgdona.  She informs him of a quest they will need to embark on in order to gain the weapon needed for The Prophesy.  Stark brings Briksanna’s twin daughters, who are healers, to the room.  Stark reminisces on his past relationship with Nathanial while heading to get something to eat.  Nathanial feels unsure of his capabilities of being a king and shares it with Stark.  Intent on forgetting Nathanial and Briksanna explore their love, embrace their heated desire allowing their emotions free reign.

Stark is surprised when the Goddess Merridian appears out of nowhere seeking shelter before passing out in his arms.  He takes her to the infirmary turning her over to the twins.  The twins explain, to the rest of the family, the dynamics of energy and High Royalty distribution of energy on Skaldanna.  Briksanna doesn’t believe she can trust Merridian and she offers a truce allowing Briksanna to access her memories.  Briksanna explains what is to be expected while on Skaldanna as royalty and how energy is the sole source of life in all the realms.  The warrior interacts with Lord Drakkoon, further acknowledging his hatred for him.  He reflects on The Mistress as his protector while he cherishes the medallion she gave him and together they will destroy Lord Drakkoon.

The next day, all family members prepare to leave for Skaldanna.  Nathanial reflects on his own personal trust issues while Briksanna and Katerina form a portal successfully transporting everyone.  Briksanna is surprised to find, Hawk, the general of her father’s royal guards waiting for her.  Mistakenly reacting to aggression from Hawk, the twins threaten Hawk at sword point until Briksanna forces them to release him.  They go to the castle and engage in heated discussions forcing Merridian to reveal herself as a Goddess.  Everyone agrees to survey the damage to the Second Realm.  Briksanna speculates on the possibility of a different villain acting out these attacks.

In the west wing of the castle two guards assigned to the wing disrespect Briksanna and Nathanial.  Suddenly the lovers fight viciously, attempting to kill one another.  Merridian sees an evil spell weaving around them and she breaks the spell rendering Nathanial and Briksanna unconscious.  Katerina says she witnessed the day Briksanna’s family had been killed by the same magic.  Nathanial and Briksanna awaken horrified by their memories and reassure themselves of their love.  Nathanial leaves to survey the land with the men and Briksanna seeks Katerina and one of the twins to view the grounds outside.

Appalled at the destruction within the land, Briksanna embraces the core energy from Skaldanna collaborating with one of the twins, they sing the land back to life.  Briksanna embraces her role as High Queen understanding The Prophesy more clearly.  Nathanial worries when the lightning begins, only to be caught up in the energy tsunami flying through the realm, effectively erasing his insecurities, strengthening his resolve to be the leader he wants to be.  Racing back to where the women were, Nathanial orders everyone to the castle.

Heading to their rooms, Briksanna gets violently ill revealing she is pregnant with their first child dictated by The Prophesy.  She expresses her fears for their child and the children they have fostered together along with the impact being pregnant will have on their reign in the near future.  Nathanial replaces all her doubts with his love.  She accepts his love, trusting him with everything she has.  He accepts his role as High King knowing she will forever stand beside him never in front of him.  Together they accept their roles within The Prophesy.